Want to learn the art of illusion? This effect is an absolute classic of magic, you will have seen this trick performed numerous times in different ways by many famous magicians over the years. David Copperfield, Paul Daniels, Siegfried & Roy to name just a few.

MASTER THE ART OF ILLUSION WITH THIS TUTORIAL!

THE EFFECT: The magician stands out in the open, you can clearly see all around him. All he has is a 'magical' curtain placed on the ground. He slowly raises the curtain and in an instant lowers it again to reveal his assistant who has seemingly appeared from thin air. Watch the effect below, then learn the secret...

THE SECRET: The art of illusion can often be very misleading. You may think this effect is done with mirrors, trap doors or even camera trickery, however the secret is so much more simple than that (as most tricks are). Watch the secret below...

Pretty cool hey? The effect relies on a few principles. First perspective. My garden (yes that was my garden!) is quite long, it does not really look like someone could hide down there, it looks quite small, but that is because it's in the distance. Focus for this trick is always in the foreground, and that's what the magician tries to maintain. 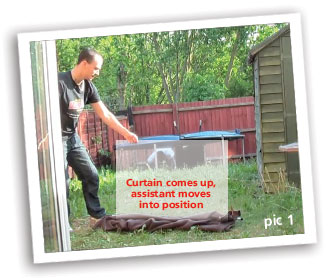 Timing is also critical for this illusion to work, as soon as I raise the curtain just above the trampoline in the background I signal my assistant to get moving!

Depending on the situation you can have a special signal or word you say which the assistant responds to. (Pic 1)

For example you may say to your audience "Now watch this!" This would be your assistants secret word to go, go, go! 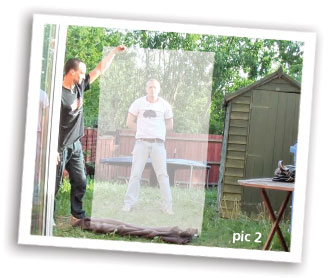 The assistant only has a matter of a few seconds to crawl on his hands and knees up the garden, keeping as low as possible. I carry on raising the curtain until he is in position then quickly drop it to reveal him. Speed is crucial with this effect, you don't want to have the curtain raised up too long or the impact of the illusion will be diminished. (Pic 2)

TIP: You have to be a bit careful with your angles when performing this illusion. Your audience should be directly in front of you and preferably sitting down. This trick works well with a smaller group of people. So go on give it a go!

Return from Art Of Illusion to FreeMagicTricks4u Home Page