Card magic can amaze in so many ways. I love its simplicity… just 52 cards and 2 hands. This effect is sure to get a great reaction from your audience!

THE EFFECT:  Remove 2 Jacks from the deck, then using an audience member’s help, the cards are put back into random places in the deck. Turns out, they’ve been placed next to their partners: the other 2 Jacks!

• Easy difficulty level
• You can involve a random member from the audience!
• BIG payoff at the end of the trick
• Deck can be inspected afterwards

THE SECRET:
This takes some deck preparation before doing the trick.

Take the Jack of Hearts and the Jack of Spades and place them at the top of the deck (pic 1). With the other 2 Jacks, place them somewhere random near the opposite end, leaving some cards between them (pic 2).

Take your deck of cards and spread them out on the table. The trick is to NOT show the hidden Jacks that are on top of the deck (pic 3)! I like to place my index finger a few cards above their position, so that the Jacks are concealed by other cards when I spread the deck (pic 4). 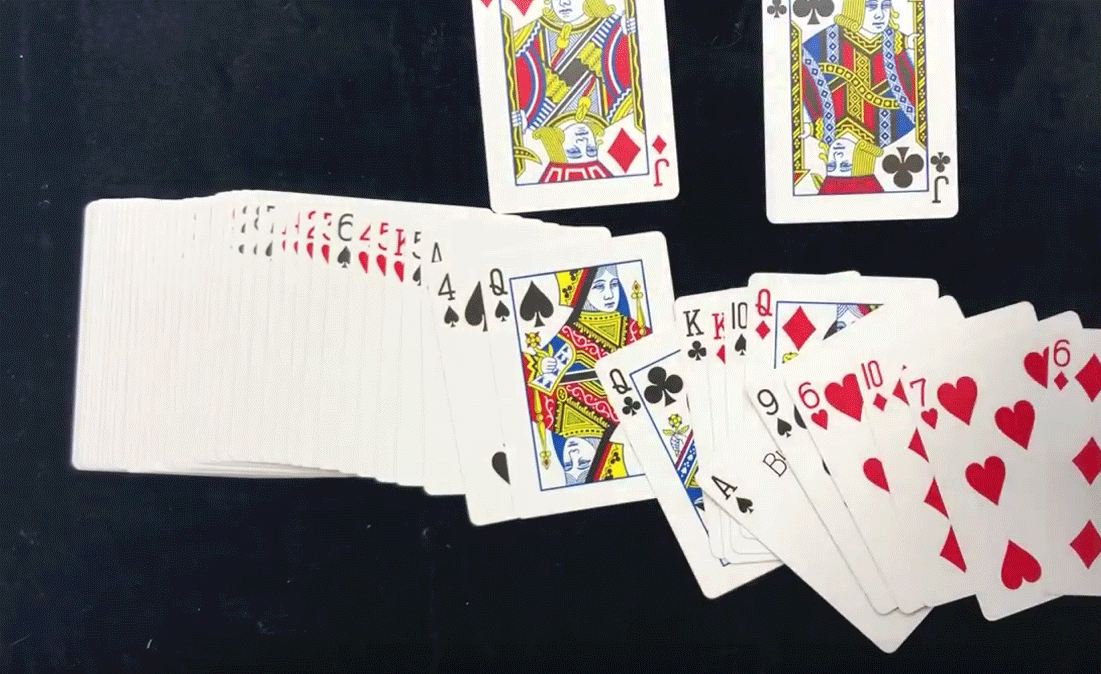 Now as the cards are spread out, you can see and remove the other 2 Jacks which appear to be randomly mixed in, near the front. Place these 2 cards above the spread deck. (pic 5)

Square up the deck and flip it over so that the cards are face down. As you do this, secretly slip one of the Jacks hidden on top of the deck down to the bottom of the deck. (pics 6 & 7)

This bit of card magic will take some practice. If done correctly, the Red Jack is on the bottom now, and the Black Jack is still on top. (pic 8)

Say something like “I’m going to start dealing the cards. Whenever you feel like it, tell me to stop.” (pic 9)

If they choose the deck in your hand, slide the top card off and into the pile, and place your Red Jack from the table face-up on top of this pile. (pic 10) Place the deck from your hand face-down on top of the pile and square it up. (pic 11) If they choose the pile on the table, place the Red Jack face-up on top as usual and carry on with the trick.

As the performer, you’ll know that you’ve just placed the 2 Red Jacks face to face! (pic 12) Remember, we secretly held a Red Jack on the bottom of the deck earlier.

Now do the steps again…start dealing from the top and tell them to stop you whenever they feel like it. (pic 13) When they say to stop, once again ask them if they want to choose the top card from the deck in your hand, or the top card from the pile you’ve been laying down. Remember, whichever choice they make doesn’t matter. Place the Black Jack face-up on top of the pile (pic 14), and place the rest of the deck face-down on top. (pic 15)

At this point, the trick is pretty much finished! Spread the cards on the table, and remind your spectator that they could have chosen to stop anywhere in the deck. This makes the reveal of the face-to-face matched Jacks even more impressive. (pic 17)


This sequence of card magic is so much fun because it lets your audience think they may have special psychic card-selection powers…but you and I know the secret ;)