Cheap magic tricks in my experience are often not very good. Luckily Dynamic Coins is not one of them! Dynamic Coins was one of the first coin tricks with props I ever learned.

This was well over twenty five years ago but it is still a great little trick to this day and very affordable!

Cheap magic tricks mean they are mass produced, so you may have seen this trick before, if you have I may be able to give you a few tips. If you have not seen this before you are in for a treat!

Now Available In My Magic Store ONLY $24.99 With FREE Shipping!

DON'T BREAK THE BANK: USE THESE CHEAP MAGIC TRICKS!

Dynamic Coins has a devilishly simply secret like all great illusions. I actually (for some mad reason!) own three Dynamic Coin sets mostly from birthday and Christmas presents. I obviously can't get enough of one of the coolest cheap magic tricks!

THE EFFECT: You show two brass caps and a ring. The caps are seen to be empty and the ring unprepared. You turn one of the caps over and instantly a stack of five coins appear beneath the cap.

You then make the coins teleport to the other cap instantly. Placing one cap on top of the other the coins penetrate right through solid metal.

As the finale you can either make the coins totally vanish again or change the stack of five coins in to smaller ones in the spectators hands!

Buy the AMAZING Dynamic Coins in my Magic Store HERE.

This is definitely one of my favourite cheap magic tricks to perform!


WHAT YOU RECEIVE: Right out of the pack you get two gimmicked brass caps, a brass ring and the instructions.

THE SECRET: The two brass caps are gimmicked. Both contain two hollow inserts with fake coin edging on the sides.

To release the inserts from the caps you use the ring. Place the ring over a cap and tap it down onto the table, lift up the cap and the insert shell will remain.

You can then place a silver coin on top of the fake insert and it will look like a real stack of five coins. Cover the stack with the cap (but without the ring) press slightly, then when you lift the cap up the coins will have seemingly vanished. This is the basic move for how the trick works.

Blow everyone away with the awesome Dynamic Coins trick. Buy HERE.

TIP: This is the only part in the trick where it is advisable to slam the caps down as this seems a normal action when trying to penetrate metal (otherwise see DON'T number 1 below). 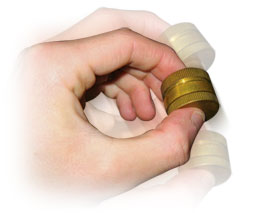 Place one of the caps upside down and the fake coin stack on top. Place the ring over this and the other cap on top to make a kind of sandwich.


If you pick this up and give the whole bunch a shake it sounds like the coins are rattling but in fact it is the ring hitting the caps, clever!


Press the caps together with your fingers then spin the caps on the table to show the coins have vanished once more. This is a very effective move as a split second ago the spectator thinks they hear the coins then they suddenly vanish.


As an alternative finishing effect you can make the stack of coins change into smaller coins like pennies or dimes. How? Well this takes a bit more practice but is well worth the extra effort.


You first need to conceal the smaller coins in your hand while performing the trick. Easier said than done I know, especially if you have small hands. When you have finished the teleporting and penetration parts of the trick place the fake hollow stack onto your hand secretly over the smaller coins.

Then place the whole stack on to the back of a spectators hand. (not in their palm this is too soft) give the cap a magical tap and remove it to reveal the smaller coins.

You can then use your finger to separate the coins on their fist. Your spectators will be amazed.

• Whenever you make the coins appear it does not matter if the top coin is not exactly square to the rest of the stack. It helps in fact make the stack look more realistic. After all stacked coins are never regimented. Be careful though a little bit off is OK, too far and the stack will be revealed as fake.


• Hand the caps out for examination. But press the inserts into the caps tightly with your thumbs first before you do to stop the real coins rattling.


• Perform this trick on a soft surface. A magicians matt is ideal, it helps the performance and looks professional.


• Make sure the real coins on top of the fake stacks are both either heads face up or tails face up. If you have a mixture this may be spotted by a spectator.

• Never slam the caps down, this will imply to spectators there is something needed to be dislodged, potentially exposing the secret.


• Do not perform on a fluffy surface such as a carpet. If you do fluff will be trapped between the insert and cap exposing the secret.


• Do not press the cap over the fake stack too hard, they will be a lot harder to come back out again and it will look suspect to any spectators.


• Never give the same spectator a cap and ring to examine. If possible give a cap to two different spectators and the ring to a third. If one person has the caps and ring they may discover the secret.


• If possible try not to show both caps upside at the same time if one of the fake coin inserts are on show. This is because the caps will differ slightly in thickness which a keen eye might spot!


• This is one of my favourite cheap magic tricks - so keep the secret!


When you get good enough at this trick you should be able to do it without the ring. Simply never push the fake inserts all the way in. You can turn the caps over curling your fingers under to stop the inserts from falling out.

Cheap magic tricks often mean cheap quality, not so with Dynamic Coins. But be careful though different manufacturers of this effect vary in quality. So it might pay not to buy the absolute cheapest set you can find.