This is one of the most baffling dollar bill tricks ever! I first saw this cool illusion performed by Paul Zennon on one of his T.V specials.

It was an immediate crowd pleaser, peoples eyes stood out on storks and I have to admit it got me scratching my head too!

THE EFFECT: The magician displays two bank notes and shows them openly back and front for all to see. 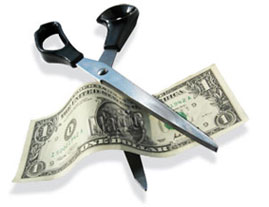 The magician places them back to back, he/she then cuts through the centre of both notes with a pair of scissors - the notes are clearly seen to be cut into four halves. No mistaking that!

Without any suspicious moves, the magician instantly open both halves to show the notes restored to their original condition, astonishing!


• One of the coolest dollar bill tricks
• You can let a spectator cut the notes!
• Astonishing magic that is EASY to do
• No tricky slight of hand needed
• Can be viewed from any angle
• Perform surrounded

THE SECRET: This is one of the greatest dollar bill tricks, it's an excellent ‘cut and restored’ illusion that is really effective when performed with real money. You can use play money, fake money, blank cheques or any form of printed paper about the size of regular currency.

So what's the secret right! Actually I can't tell you.... Just kidding :-)
First you need some secret preparation. 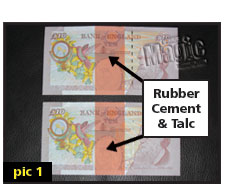 Place two nearly new bills face down on a table. Apply a thin layer of rubber cement, about half an inch wide, down the centre of the back of each note.


When this is dry, add a second coat of rubber cement and allow that to dry also. (Pic 1) What's rubber cement? see TIP 1 HERE.

Next, sprinkle a little talcum powder (baby powder) on the cement covered area on each bill. Spread the powder over the entire surface of the cement with your finger or a soft brush.

You will notice the treated areas of both bills will not stick to each other because of the powdered surface. Put the bills in your wallet/purse or on the table and you are ready to perform this very clever close up effect!


THE METHOD: Begin by removing the two prepared notes from your wallet/purse and casually showing both sides of the notes. Place them back to back as shown in (Pic 2 & 3).

We will call the note nearest you Note A and the one nearest the spectators Note B Square up both notes. Be sure that the cemented areas are touching each other.

Hold both notes with the thumb and finger of your left hand as shown in (Pic 4). With your right hand holding the scissors, carefully cut through the center of both notes.

Make sure that you cut within the areas covered by the cement stripes. Done openly and deliberately, there will be no question in the audiences mind that both bills have been cut in half - which they have! (Pic 5).

With the thumb and fingers of both hands, separate the halves of the notes (Pic 6), and shake them open (Pic 7).

Because of the rubber cement, the halves in each hand will stick together at the cut edges giving the illusion that the four half notes have fused together to form two complete notes once again!

The reason this is one of the greatest dollar bill tricks in my mind is because the spectators see and hear the notes being cut, so it is that much more unbelievable when they are 'restored' people freak!

TIP 1: Depending where you live in the world rubber cement (a type of craft glue) can be easy or hard to get hold of. For example if you live in the US you're OK. Any hardware store should stock it.

For people in the UK and other countries good product is hard to find. I suggest Amazon if you have any trouble finding it. >>>

TIP 2: Done well, this ‘quickie’ is a real eye popper! First practice with stage money or with newspaper cut to the size of bank notes. This way you will find out just how much rubber cement and talcum powder to apply. You can then try it with real notes.


TIP 3: The real notes should be new and crisp (maybe from a cash ‘ATM’ machine) and fit together neatly for pics 3 and 4.

TIP 4: Don’t worry about losing money when using real notes, as the halves can be stuck together with transparent sticky tape, just as with any torn notes.

TIP 5: The higher the currency value the bigger the effect becomes be really brave and use $100 notes! (or equivalent).

TIP 6: As an alternative method you could let a spectator cut the notes just make sure you hold the notes tight and get them to cut in the centre (where the rubber cement is!)

For another one of my favourite dollar bill tricks why not check out the cool Self Folding Note illusion.