Congratulations for finding this page! If you want to learn magic tricks you have certainly come to the right place!

This is a cool illusion to turn paper from a magazine into real money! This effect and 60+ other tutorials are included on my Magic Trick Tutorial CD which you can pick up at a special subscriber discounted price right HERE.

CONSTRUCTION: You need to glue the real money to a magazine piece (pic1) and (pic2) use a glue stick or double sided sticky tape. Just make sure it is not too sticky or they will be permanently stuck together!

You need to glue approximately two thirds of the note and magazine pieces together back to back. That way you have a small flap that overlaps on each side.

You can then place four or five un-gaffed magazine pieces on top of the magazine side and four or five real notes on the real money side. You should end up with a small packet.

When you initially show the magazine paper to a spectator have one sheet on the bottom of the whole packet (providing cover). This covers the real money so you can now show the back. The spectators believe they have seen the front and back of all the pieces, but in fact you have concealed the real money.

Show the other un-gaffed pieces front and back. The last one you show needs to be the bottom piece which you have to place back on top again. You can then perform the flick move to change the magazine into money. As soon as the money has changed immediately place one of the notes below the packet again (covering the magazine pieces) fan through the money showing them back and front. You can show the back of the packet because the note is covering the magazine pieces.

It's a simple secret but an effective illusion when performed well, you will need to practice this trick. You need to make sure you do not flash the money when fanning through the magazine pieces. Similarly when you have 'transformed' the paper to money you have to be careful not to flash the magazine paper.


• Practice the flick move to get it fluent and smooth. It must be performed fast or spectators will see the change. Grip the magazine pieces on the fold with your thumb and fingers then flick forward turning the packet upside down. This flick causes the money side to unfold being revealed to the audience.

• Try and perform the trick with magazine or newspaper cuttings, you can use white paper but the hidden real money is more likely to get flashed. Because magazines are quite 'busy' any small flash of the real money will probably not be seen, and vice versa.


• The higher the value of money the more impressive the trick looks. Just be careful if you are carrying around large sums of cash!


• Perform the effect when you are out and about. Maybe in the pub or at the local supermarket people will be amazed. You could say something like "I don't like carrying large sums of cash around with me, so when I need some I take ordinary pieces of magazine... (perform the move) ...and change them to real money by magic!"

I love to learn magic tricks like this one simply because the effect is so unexpected. One minute you are showing just ordinary pieces of paper then BAM real notes - AMAZING.

If you can not get hold of real money to perform the trick, try it with something else, use you imagination. For example change magazine paper into newspaper or toy money, it still looks cool. 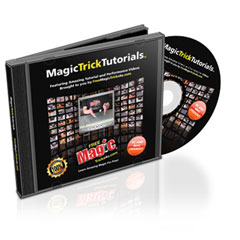 TIP "Steal" my Magic Trick Tutorial CD for a super low subscriber discounted price and learn over 60+ easy to do, amazing magic tricks to impress anyone.

I'll even throw in some cool bonuses and extra stuff! :-) If you want to learn magic tricks click HERE to Claim Your Heavily Discounted Copy of the Magic Trick Tutorial CD