This practical magic trick has been a classic scam for centuries and people still fall for it today. Learn how to do the Three Card Monte (also known as Find The Lady) so you are not scammed out of your hard earned cash. If you have not guessed already you can never win at this game.

THE SECRET:
This is such a practical magic trick just using ordinary playing cards. With this scam people are often asked to bet money on where they think the queen is. Of course no matter what they choose they lose their money. Here's how...

This practical magic trick uses normal playing cards and simple slight of hand. The queen goes in the middle with the black cards either side. All three cards should be bent in the middle slightly and placed face down on the table in a line. 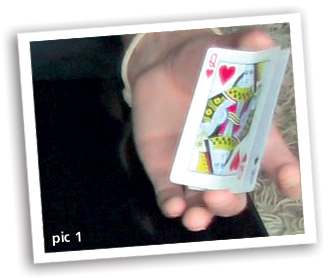 Start by picking up the black card to your left with your thumb and pointer finger and place it on top of the middle queen. Leave a gap between the two cards. Pick up the two cards and show the queen. This is the basic handling for the effect (Pic 1). 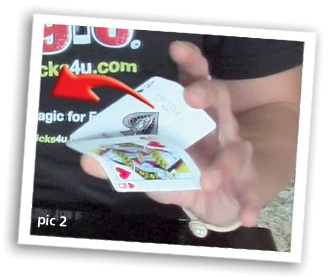 This move will take a bit of practice for sure. But it will not take too long for you to get it. Hold both the cards face down with your thumb and pointer finger. Cards slightly separated.

Use your middle or ring finger to pull back the bottom card (the queen) slightly so you can throw down the black top card instead (Pic 2).

I have over exaggerated the move in the tutorial video/pics above so you can see what I am doing. But in the actual performance you do not need to make the move so obvious. This now gives you the ability to basically choose where you want to place a black card or a queen.

The first time you mixed the cards the queen was in the middle so now you have done exactly the same (but with the special move) your spectator should expect the queen to be in the middle again. Reveal that it is infact on the end.

For this next bit do another normal mix so you leave the queen in the center. Now place the queen from the middle on top of the left back card. So instead of the queen being on the bottom you now have the black card.

So when you ask the spectator where the queen is, they believe they have just seen both black cards - so the queen must be the remaining face down card, again they are wrong!

With the special move where you can 'throw down a queen or a black card' coupled with the 'show the same black card' move you can really confuse your spectator with a great routine. Now to teach you the Holy Grail for this effect.

More often than not a spectator may just take a total guess at where the queen might be - and they may well be right. This is when you can use 'The Swap' move.

Practical magic! - If a spectator chooses the queen all you need to do is pick up one of the black cards as if to use it to flip over the card the spectator has chosen. In fact you secretly swap the cards. This is definitely the hardest move to master and needs lots of practice as you only get one shot at it. If you mess it up during a performance your spectator will see.

Here's what to do. Push the chosen card (queen) forward and take another card at the corner with your thumb and pointer finger and slide the card under the chosen card at an angle (Pic 3). Use your other hand to steady the card on the table (Pic 4).

As the two cards meet grip the top card (Queen) keeping it face down and turn over the bottom black card with your remaining free fingers (Pic 5). Done at speed it will simply look like you have turned over their selection with another card.

Again this is an advanced move that requires practice. You do not need to use this move in your performance until you have perfected it. If you can get the move down though you have a very complete Three Card Monte routine! :-)


TIP: There is usually an accomplice (in on the scam) who will bet some money on the queen and win. This gives anyone else playing the impression that they can win too - they can't!

For more practical magic tricks check out the links below...