This is a one of the most simple card tricks you can perform, however it's a great puzzling illusion! All you need is a larger coin, smaller coin, a playing card, scissors and a pencil (for the preparation!).

THESE SIMPLE CARD TRICKS WILL AMAZE YOUR FRIENDS...

THE EFFECT: You show a playing card with a small hole in the center of it. You challenge a spectator to push a coin through the hole. As the coin you have given them is too big your spectator finds it's impossible.

However you take back the card and coin, give the coin a magic squeeze then proceed to push the coin through the hole. A great quick trick you can perform anywhere! Watch the performance and tutorial video below to learn simple card tricks...

This is one of the most simple card tricks, when you know the secret of course! To prepare take a playing card and a small coin. Fold the playing card into two then draw round the coin onto the face of the card in the center with a pencil. Take some scissors and carefully cut out the hole.

Next, near the top of the card exactly where the edge of the design finishes cut a small slit around three centimeters in length. You now have your gimmick made.

THE SECRET: Challenge your spectator to push a coin (larger than the hole you made) through the center of the playing card without ripping it. Obviously they will fail because it's impossible. Or is it... 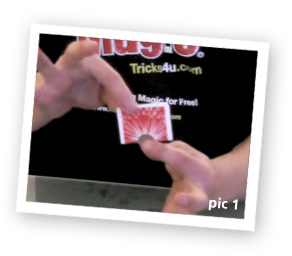 Tap the top of the coin and let it fall into the middle of the card into the hole. Tug on it slightly to show it is not going through then look puzzled (pic 1).

Say something like "I seem to be having the same problem as you, so I will have to use a little magic". 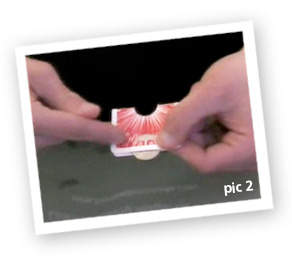 Take the coin and pretend to squeeze it tightly in your hand. Say something like "That should do it!".

Place the coin into the folded card again but this time allow it to go between the card then through the small slit in the gimmick.

It should appears at the back of the card (pic 2).

Simply use your thumb to cover the coin and you can clearly show the back of the card again to "prove" it is inside the card. 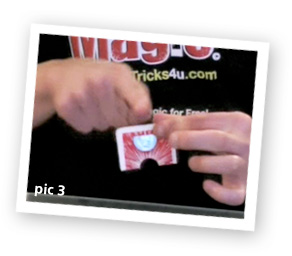 All that is left for you to do it give the coin a tap and let it fall behind the card.

It will look like the coin has shot right through the hole!
(pic 3 Exposed View).

Your spectator can have another go at trying to do what you just did but they will obviously fail miserably!

TIP: Don't worry too much about handing out the card to your spectator to try the trick they will almost never find out there is a tiny slit in the card.

If you want you can make up two identical cards just one with a secret slit and one without. You keep the secret one for yourself and give your spectator the other one to try with! :-)

TIP: Don't make the smaller hole too small so it looks ridiculous that the large coin could fit through just make it slightly smaller, why? because it is much more effective when you pull off the trick that's why!