Sponge ball magic trick routines are a classic of magic, but I probably didn't have to tell you that right? Well I thought it was about time I show you a neat little bunch of tricks, that work well together.

Don't have sponge balls? Get some in my new magic store HERE. Or Use balls of paper or squares of sponge!

THE EFFECT: The magician takes an ordinary sponge ball and begins to roll it in his hand, slowly the sponge ball seems to grow bigger until it actually splits into two balls. One ball is placed into the right hand and the other ball in the left. With a little magic pass one sponge ball teleports into the other hand, which is now holding two sponge balls!

Next a sponge ball is is placed into the right hand and is made to completely vanish. The second sponge ball is rubbed on the right elbow, but nothing... so the magician tries the second elbow and as if by magic is able to split the sponge ball into two again.

THE SECRET:
This sponge ball magic trick routine is very easy to do, but there are a few steps to remember so it may take a bit of practice. Watch the reveal video below first, then I will talk you though each step...

To set up this sponge ball magic trick routine you will need three identical sponge balls. Place one of the sponge balls under the collar of your shirt. Place it just behind your neck so that the ball is held between the shirt and your skin. From the front spectator will not see a thing.

Take the second sponge ball and screw it up really small, into a tight ball and palm it under your pinky and ring finger. Hold the other sponge ball in this hand, palm facing the audience. This is a great convincer that you are only holding the one ball (without actually having to say it) (pic 1).

TIP: Magician's Sponge Balls are incredibly spongy and they will squeeze down to minute sizes, meaning you can palm them very easily.


Once you have clearly shown the sponge ball place them both into your other hand together as one. Begin to roll them in your hands first with your palm then gradually with a finger, as the balls expand it will look like one has split into two (pic 2).


Next take once sponge ball and pretend to place it in the other hand. pick up the second ball with the hand that has the first sponge in, hold these as one. Give a magical gesture and show that one sponge ball has teleported to your other hand (pic 3).


For the next vanish simply pretend to place a sponge ball into your opposite hand again, but actually retain it. The hand that your are pretending to have the ball in should be moved towards the spectators slightly so they are forced to focus on it.


As soon as you do this let the other hand drop the sponge off the edge of the table into your lap. Or if standing secretly into a pocket or sleeve it (pic 4).

You are now left with once sponge ball. Take this sponge ball and rub it on the opposite elbow to the side you have the hidden sponge. When nothing happens look surprised and rub in on the other elbow. As you do this steel the hidden sponge with your hand and bring both together quickly (pic 5). Give a tear motion and show you have split the balls into two again.


Now you can end the sponge ball magic trick routine at that - but to perform the last effect you will need a special sponge ball. It's called an "Incrediball" and basically is a regular sized ball until you turn it inside out by pushing it into your fist. It then grows to a much larger ball.


The only thing to keep in mind when using the "Incrediball" throughout the routine is that it is not as soft and spongy in it's small state as regular balls and there is a small hole (which you use to turn it inside out) that you must cover at all times during the routine until the finale.


To make the "Incrediball" grow simply push it into your fist (with the hole facing your fist) as you do this gradually you will in fact turn the ball inside out and it will GROW! (pic 6).


TIP: The second effect where you make one ball teleport to the other hand has a much greater effect if you place them into the spectators hand to open and reveal they now have two sponges. Having the magic happen in the spectators hand always has a better effect because they don't think you could have done any slight of hand or funny business. 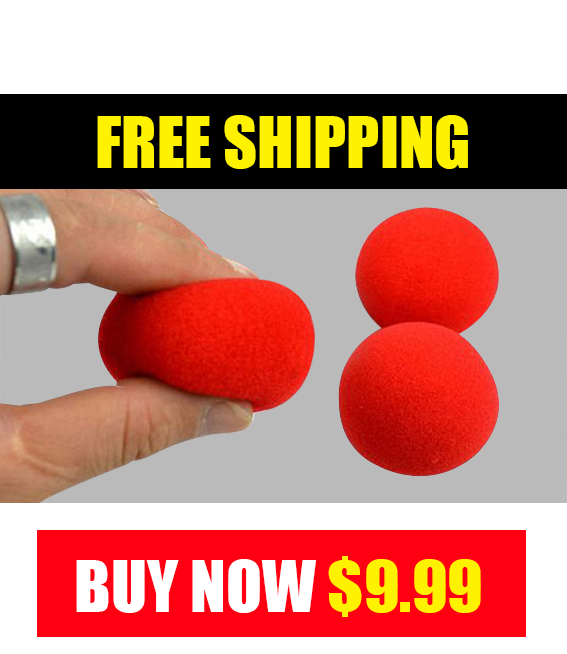 Don't worry if you think they will feel two sponge balls, because they won't. Also when you give them the balls get them to squeeze them tightly. This makes sure they do not just open there hands straight away before you have had the chance to 'vanish' your ball.

TIP: Genuine magician's Sponge Balls are a real joy to handle and manipulate. But again if you do not have the money to spend on sponge balls, use rolled up pieces of paper or cut a regular wash sponge into smaller squares of equal size.