This is a very visual illusion you can perform with a couple of coins and a pen. An incredible visible transposition of two coins in the spectators hand!

PREPARE TO AMAZE YOUR FRIENDS WITH THIS VISUAL ILLUSION!

THE EFFECT: You show a Penny and a Five pence piece. The spectator holds the 5p tightly in their fist. The Penny is touched with a pen and it instantly and visibly changes into the 5p!

The spectator opens their hand and discovers they are now holding the Penny, Incredible! Everything can now be examined.


• Any Penny and Five pence piece can be borrowed (or equivalent)
• Everything can be examined before and after the trick
• Instant reset - once performed your ready to go again!
• An incredibly visual illusion

THE SECRET: For this cool visual illusion you will need to make a special gimmick. A pen with a magnet embedded into the end! This special gimmick once made will be undetectable from a spectators general examination.

Find out how to make the gimmick for this highly visual illusion HERE. Or you can get the Pen Through Note trick from my Magic Store and use the same gimmick for this trick. (Two amazing tricks for the price of one!)

THE METHOD: Begin by borrowing a 5p and a Penny. Depending on your own countries currency you will need to substitute a penny with any larger magnetic coin and a 5p with a smaller non magnetic coin. Try to get two coins that are different colours.


Display the 5p in your left fingertips and a Penny in your right fingertips. Concealed in your curled right fingers should be a duplicate Penny. Ask a spectator to hold out one hand, palm down, fingers extended.

Now place both your hands below theirs, so that the two visible coins are now out of view.

At this point neatly and secretly place the 5p below the Penny and hold this ‘now double coin’ between your left thumb and first finger. Your right hand is now free to manoeuvre it’s hidden Penny to the tips of the right thumb and fingers.

While you are doing this, look at the spectator and ask him/her to name one of the coins - the Penny or the 5p. If the spectator says “the Penny” say “Right...Hold on to the 5p and I will do something amazing with the Penny” As you say this, press the extra Penny into the spectators palm and with the right hand, guide their hand into a fist. Meanwhile, the left hand emerges from below the spectators fist holding the Penny (Penny with 5p concealed beneath it).

Because the spectator now sees the Penny at your fingertips, they will assume that they must be holding the 5p! This is a very important part of the psychology which makes the transposition so amazing.

NOTE: If the spectator was to name the 5p do exactly the same actions stating the same thing..don’t forget, they do not know what’s coming!

Now, balance the Penny (Penny with 5p concealed beneath it) on the back of the spectators fist. Bring out the pen, stating you will make a magical gesture with it. Do so, by holding the pen between your thumb and first finger (magnet end down).

Quickly make a few tapping gestures with the pen on the back of the spectators hand, finishing by tapping the Penny instantly curling the pen towards your palm. What actually happens is that the pen will pick up the Penny which is then taken into the palm (Pic1). 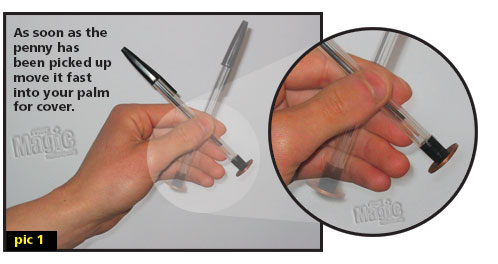 Remember, as soon as the pen picks up the coin, twist the pen so that the coin goes into your palm. The spectator will not see the ‘pick up’ because their attention will be held by the sudden change into the 5p. All that remains is to ask the spectator to open their hand.


Your spectator is now further STUNNED by this visual illusion to find the Penny has arrived in their hand. While the spectator examines the coins, quietly put the Pen with duplicate Penny into your pocket. You can have a duplicate pen placed in your pocket to bring out in exchange for the gimmicked one for examination.


TIP: When you press the extra Penny into the spectators palm and guide them to make a fist say something like “Squeeze really hard so there is no possible way I could get to it” This focuses them on squeezing the coin so they are less likely just to open their hand.

ALTERNATIVE EFFECT: As perhaps a more quick trick performance you could simply ask a spectator to hold out there hand palm up, fingers together then place the Penny (with 5p concealed beneath it) onto their palm and say something like “I really hate pennies weighing my pockets down, don’t you?!”


Perform the ‘tap’ move and instantly change the Penny into the 5p then say “So that’s why I prefer to change them - by magic!“


With this effect you do not get the double whammy as in the first trick but there is no need for a pen switch. Because you have vanished the Penny the only remaining coin is the 5p which is not magnetic, so there is no chance the spectator will discover the pen’s magnetic properties!

Once the Penny has been ‘picked up’ into your palm secretly remove the Penny from the magnet and give the pen out for examination! Either conceal the Penny in your hand or put it in your pocket secretly.

Alternatively if you are sat at a table simply drop it into your lap unnoticed this is still a very visual illusion.

TIP: You can let the spectator examine the pen before the trick as long as you do not give them the penny and pen at the same time or else they may find the pen is magnetised!

This really is a great visual illusion. The gimmick takes a little time to build but will last you for years. Take it around in your pocket and you will always have a little miracle to show anyone! Having trouble building your own gimmick? Save yourself the trouble and get one on Amazon.