Performing magic tricks for kids can often be quite tricky. Luckily this classic piece of magic seems to go down well with kids and adults alike. It is of course the Cups and Balls.


THE EFFECT: One by one the magician is able to make three balls seemingly pass through solid cups. For the finale large sponge balls appear under two of the cups. One of the best magic tricks for kids, watch and learn my version of the classic Cups and Balls below...

THE SECRET: I always like performing magic tricks for kids and this effect is a classic. For this trick you will either need to go and buy the Cups & Balls trick (I now stock a nice set in my store HERE). Alternatively you can use three cups of the same size and some rolled up pieces of paper.

Before the performance hide two larger sponge balls (or pieces of rolled up paper) in each of your hands. For the main cups and balls performance you will need four balls. However the audience is only ever aware of three!

Start the trick with the cups laying on the table facing the audience. This shows them inside the bottom cup and subconsciously tells them they are all empty (pic 1).

Hold all three cups upside down and begin to set each one mouth down onto the table. Now even though the middle cup has a ball in it, if you do the move quickly but smoothly enough, the ball will not fall out (pic 2). It's important not to rush the move and look suspicious, just do it at speed but casually.

Place the middle ball on top of the middle cup, then stack the other two cups on top of that. Give them all a magical tap and show the ball has passed right through (pic 3). (What you have now done is load another ball into the middle cup for the next step).

Now traditionally the trick can finish at this, however I like to add a little more for that extra surprise! As you go to set down the first cup again let the larger ball in your hand drop into the cup unnoticed. Set this cup down. Set the middle cup down as normal (which has a smaller ball in), then set down the last cup again dropping the larger ball into the cup secretly before you do (pic 5).

You can quite easily distract your audience by talking to them as you do this, maybe telling them that this is one of the oldest tricks in magic etc.

Now pick up the middle ball and pretend to place it in your other hand but in fact drop it on your lap (pic 6), act as though you are pushing the ball into the middle cup and then lift it up to show it has passed through. 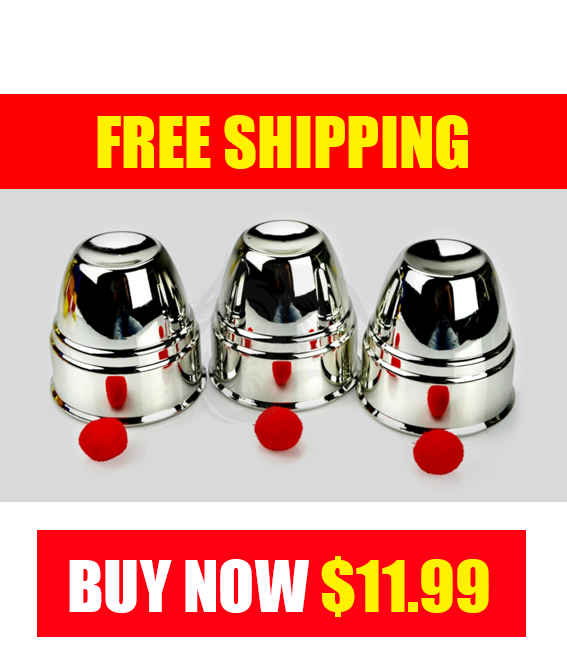 Then as the final kicker lift up the two end cups one by one to reveal the larger balls! Your audience will be astounded. What makes this one of the best magic tricks for kids is it's a very visual, colourful and tactile illusion.

TIP: When placing the cups onto the table one by one you need to do the same movement for each cup. Even though the middle one always has a ball inside it don't be tempted to slam this one down faster than the rest or it will look unnatural.

For more magic tricks for kids check out this cool Sponge Ball routine.

Return from Magic Tricks For Kids to FreeMagicTricks4u Home Page